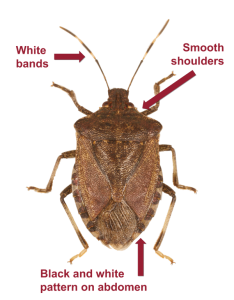 BMSB adults are one of the larger stink bugs encountered in WA (12-17 mm).  Adults have several key characteristics that distinguish it (apart from their large size):  the alternating white bands on the antennae, and the smooth margin on the front edge of the prothorax.  They also have alternating light and dark bands around margins of the abdomen; however, this feature is not unique to brown marmorated stink bug.

If you see a BMSB, please send a photo, general location (inside or outside of house or car, backyard, park, etc.)  and the address it was found to: tfrec.reportBMSB@wsu.edu

How to search for BMSB