This article was originally published in the Summer 2021 edition of “American Entomologist”
https://doi.org/10.1093/ae/tmab028 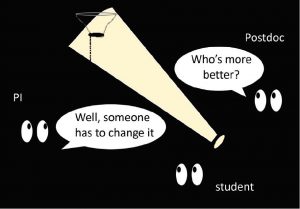 As a relatively new research faculty member, coming to grips with the true nature of running a lab has been something of an existential pursuit. The transition from researcher in- training (graduate student, then postdoc) to principal investigator (PI) has entailed a dramatic and unexpected shift in duties. During my graduate student and postdoc years, most day-to-day activities were tied directly to research projects, as expected, but as a PI, the amount of “investigating” I do is almost laughable. Instead, my tasks mostly revolve around grant applications, budget management, and administrative duties that ensure that the people who actually do the research in my lab remain employed. It’s ironic that after completing my research training, I largely stopped performing research. I spend a fair amount of time assessing my situation (i.e., anxiously spiralling) and trying to decide whether this outcome is a personal failing or the inevitable result of “climbing the ladder.”

So, where does any forlorn millennial turn for perspective on their first world woes? A podcast, obviously—but, less obviously, an economics podcast.

For many years, I’ve been a big fan of the NPR podcast Planet Money, which is informative and surprisingly funny. (Yes, economics can be funny.) In it, I see a lot of parallels between economists and entomologists: both groups are total nerds obsessed with important topics that few others care about, and we similarly like to use jargony “principles” to explain things. For example, if you found yourself in a group of economists and entomologists, the economists might toss around phrases like “opportunity costs” and “causal inference,” whereas the entomologists might casually insert a “niche ENTOMOLOGY AND SOCIETY partitioning” here and a “trophic cascade” there. 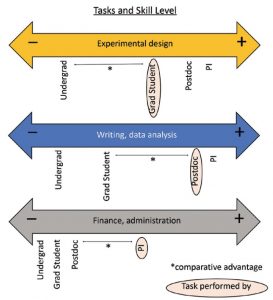 It was in this fine podcast, full of jargon, that I found an overly generalized but acceptable way to compartmentalize my PI conundrum. Enter the principle of “comparative advantage.” This is the idea that a team succeeds by allocating tasks among team members based on relative skill level instead of maximum skill level. So, in a research lab, the PI (in theory) is more skilled than grad students and postdocs in the department of research, but the relative difference in skill is not critically large. In other words, students and postdocs can still crank out some pretty dang good research, as we all know. Meanwhile, PIs, especially those of us who are new to the role, may not be that awesome at administrative tasks and budgeting; however, if those tasks were given to inexperienced postdocs or students, it could be game over for the lab. Therefore, the PI’s comparative advantage is in finance and administration, not research. So, the PI deals with the bills; the postdocs use their skills. Thanks a lot, economics.

Although my foray into economic theory may be more cute than useful, I do think it exposes a potential shortcoming in the current research structure. Because the most experienced researchers (PIs) are forced to spend so much of their time chasing funding, managing budgets, and administering, I cannot help but wonder whether this results in suboptimal research output and less time spent training the next generation of scientists. Perhaps if research labs were less beholden to the competitive grant system, our duties would better reflect our training, and the principle of comparative advantage would be much less compelling.

Author’s note: To illustrate the economic theory of comparative advantage, this article and its figures use generalizations that do not reflect all labs. In other words, I understand that there are many graduate students who perform advanced experiments, postdocs who have impressive budgeting skills, and PIs who directly conduct research. This is just meant to be a fun and somewhat sarcastic narrative of my own experience.

The carbamate insecticide methomyl is sometimes used to control slugs in field corn and soybean by foliar applications, but control outcomes in research trials and commercial operations have been mixed. In this study,
laboratory bioassays were conducted on dusky slug, Arion subfuscus Müller, a common pest of corn and soybean in the Mid-Atlantic United States, to evaluate residual toxicity of Lannate LV (methomyl) at low and high
concentrations corresponding to label recommended field rates, and if toxicity may be affected by ambient moisture or repellency to treated plants. Without wetting events, methomyl residues on corn plants caused 90–100% mortality of A. subfuscus for two days and 70–90% mortality for six days. When corn plants were briefly misted with ca. 0.3 cm of water 6 h after methomyl application, mortality was 36% 12 h after treatment, and 0 to 5% 24 h after treatment for both low and high rates. Repellency of A. subfuscus to corn plants treated with the high rate of methomyl was narrowly significant (P = 0.04) and low rate was not significant. These results suggest that high ambient moisture needed to elicit slug activity in the field also abates toxicity of methomyl residues, explaining why field control is usually poor despite high mortality in the lab.

WSU entomologists and industry partners learn about X disease vectors to help the cherry industry optimize management. Work by the Nottingham lab on insecticide efficacy (“catching lots of wild leafhoppers and trying to keep them alive long enough to kill them”) and systemic insecticides applied via soil drench is highlighted.

Codling moth has been the key pest of pome fruits across the growing regions of Washington and Oregon for over 100 years. During that time, pest management programs regularly evolved as key pesticides were phased out and new technology was incorporated. As we continue to adapt new tools and tactics, there is a need to synthesize and evaluate past and current codling moth research and management recommendations, and to communicate that information to stakeholders. The Codling Moth Task Force was created to take the lead in this issue. 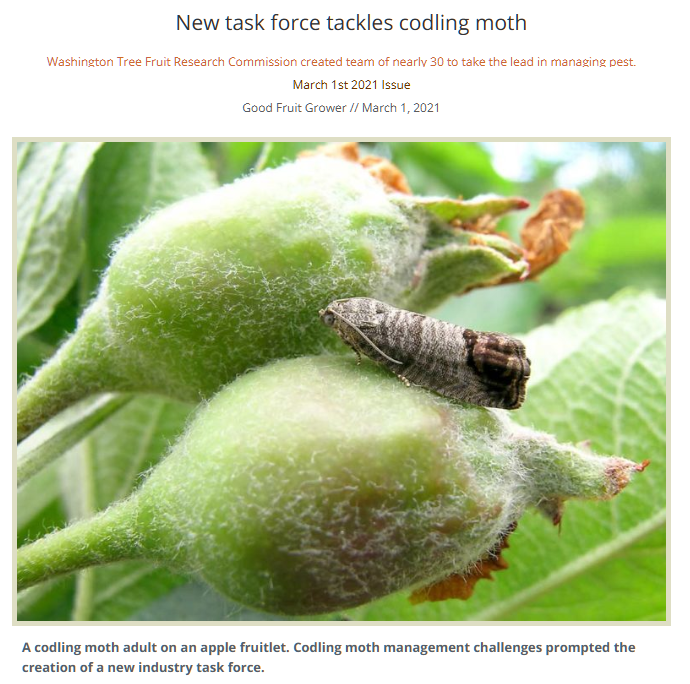 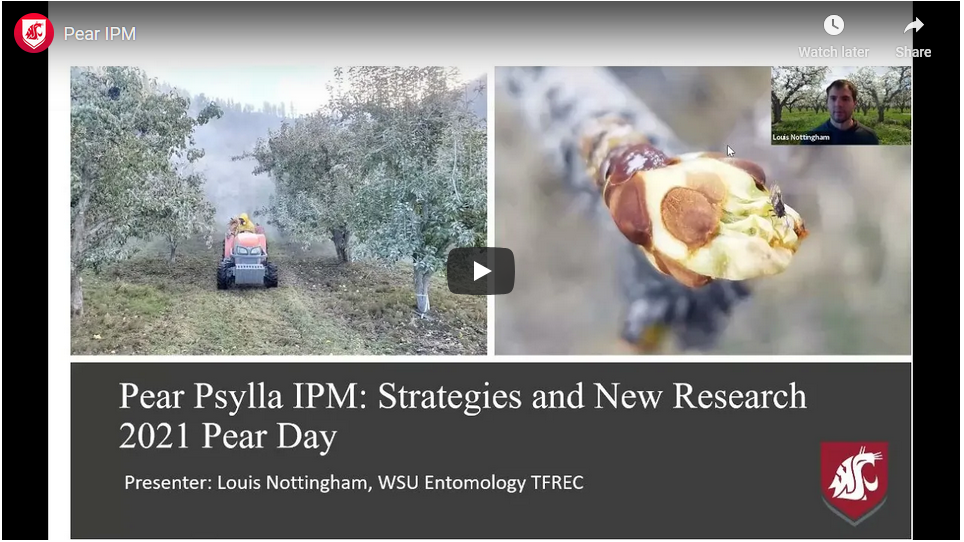 Psylla will soon be on the move!

Louis Nottingham and Robert Orpet wrote an article in the February 2021 edition of ‘Tree Fruit News’ reminding growers to start preparing dormant sprays of kaolin clay (Surround) to deter pear psylla colonization in the orchard. A dormant Surround spray will provide the first line of defense to keep psylla from entering your orchard. The optimal time to make this first Surround application depends on weather, but here is a good rule of thumb: if it is warm and dry enough for you to safely spray, go for it – psylla are probably colonizing your orchard!

Read my interview with an incredibly inspirational entomologist, Dr. Angel Acebes-Doria; someone I’m proud to call a colleague and friend.

Angel discussed topics that many early career scientists face, such impostor syndrome and running a research lab during COVID, but also some that are more specific to people who came to the US from other countries for their education and careers.

Huge thanks to Angel for bravely sharing her stories and perspectives on some difficult issues, and to the Entomological Society of America, Early Career Professionals Committee, and Entomology Today for the platform and opportunity.

Pear psylla, Cacopsylla pyricola (Förster), has remained the most challenging pest of commercial pears in Washington and Oregon, the top producers of pears in the United States. The lack of effective integrated pest management tactics for this pest has been a major barrier to effective management. In this study, we examined the potential for reflective plastic mulch affixed beneath pear trees to suppress pear psylla. In 2017 and 2018, single pear tree (cv. Bartlett) plots of reflective plastic mulch, black plastic mulch, and no mulch (check) were established in a research orchard to compare their effects on pear psylla. 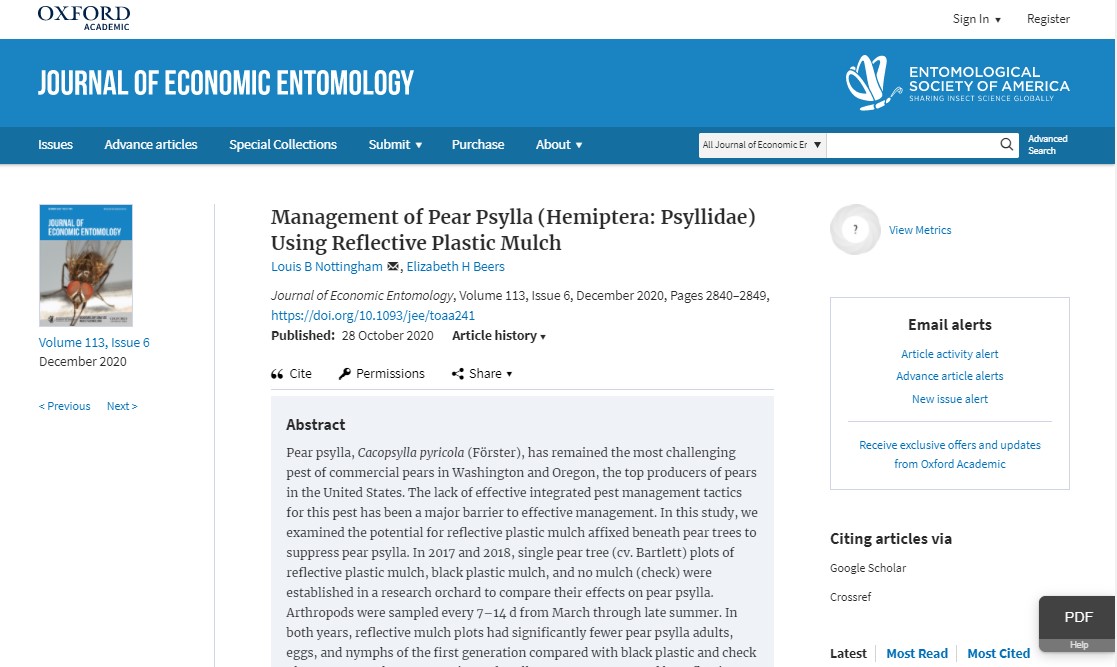