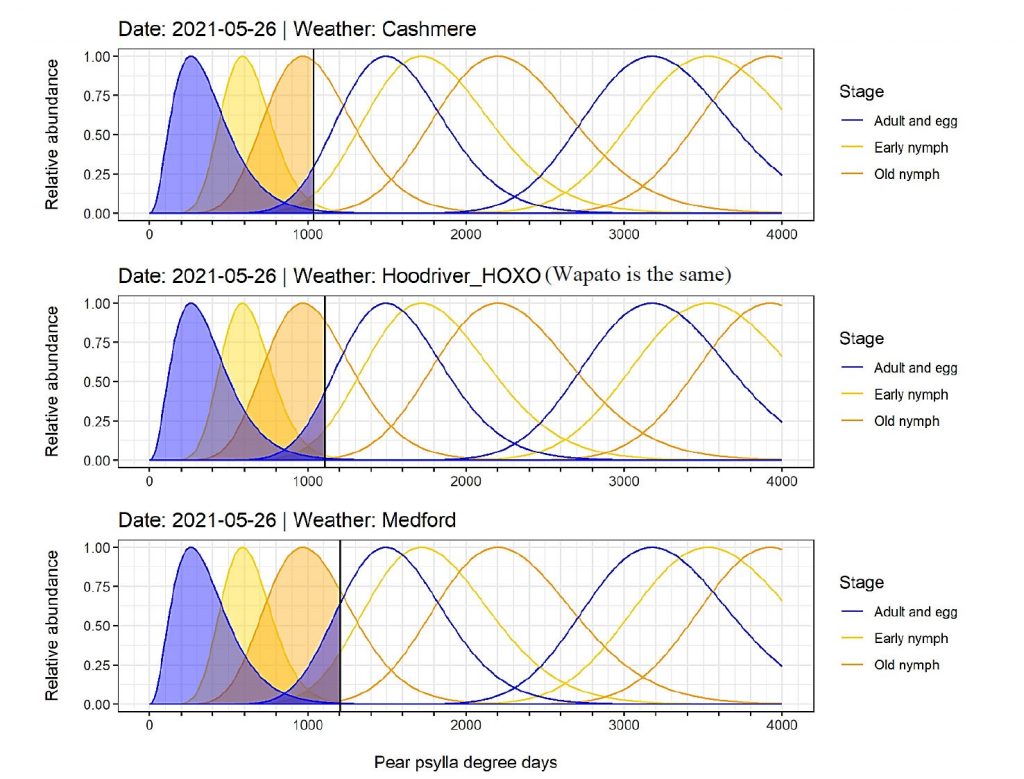 Pear psylla life stages (curves) by degree days (x-axis) for three regions. Each life-stage curve shows relative abundance of the total predicted population. Adults and eggs are combined because the summer generations occur almost simultaneously. The vertical line shows where we are as of May 26 2021. (Model created by Dr. Vince Jones. Graphic visualization by Dr. Robert Orpet)

Particle Films: If you have not applied a postbloom particle film yet, you can still do so to help deter egg-lay, but it should be done immediately because egg-lay is getting closer to peak. Our experiments have shown that spraying particle films after egg-lay provide some control of nymphs, however, it is less effective than spraying before egg-lay. It is still early enough that particle films will not leave lasting residues on the fruit.

Conventional IPM Insecticides: The first Ultor (spirotetramat) application may have already occurred, but it can still be made at this point if not. Perform the first spray now if you have moderate pressure (around 1 adult per tray on average). If you have consistently more than 1 adult per tray, you can apply Ultor + Esteem (pyriproxyfen, which is also a soft and effective codling moth material). Apply a second Ultor spray 14 days after the first if pressure remains high or increases. Neither Ultor nor Esteem will reduce adult numbers, so this should not be expected. Instead, they will prevent nymph development. While it may not be immediately gratifying, this slow kill has the benefit of providing food to grow predators while suppressing the psylla population.
*Both Ultor and Esteem can only be used twice per season, and consecutive sprays cannot be applied less than 14 days apart.

Organic Management: Now is an excellent time to use Cinnerate and/or neem products (but no neem on Comice) at high label rates. These products should be applied at least twice, if not 3 to 4 times during this generation; ideally, at least one spray would have already been applied. If adult pressure is moderate (around 1 adult per tray on average), either product alone may be effective, especially if a particle film was already used. If pressure is high (greater than 1 adult per tray), these products can be tank mixed to improve efficacy.

Cultural Strategies: Two main cultural strategies can be used for pear psylla: 1. Summer pruning and 2. Honeydew washing. Summer Pruning: The removal of vegetative shoots (water sprouts) from trees. This not only improves spray penetration, it can reduce the psylla population and amount of honeydew in trees, if timed correctly. Aim for 2000-2200DD, before the 3rd generation of adults have begun emerging and all psylla will be in nymph stage and on the shoots. Summer pruning can occur later in the season at 3100DD as well, however, there is a greater a risk of sunburned fruit. Honeydew Washing: The process of washing honeydew from trees by overhead sprinklers or airblast sprayer. This method is different from overhead irrigation because it is only used to remove honeydew (we highly recommend performing general irrigating with under tree sprinklers to reduce the risk of diseases). Because washing too often and for too long can cause disease issues, it is important to only wash when it is necessary. We recommend targeting old nymphs of the second and third generations, so 1600 and 3000 DD. But remember, there is no need to wash if you do not have a fair amount of visible honeydew. If using overheads, we recommend about 6 hours of runtime for a system delivering ~70 gallons of water per acre per minute. A nonionic surfactant like Regulaid can be mixed in halfway through the cycle to improve honeydew removal. For airblast sprayer washes, use at least 800 GPA for smaller trees, and increase gallonage with tree size; the goal is to make water run off all leaves.